Has she killed a bunny?!? 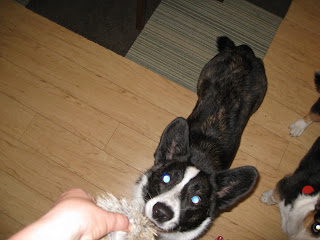 In my continuing quest to motivate Ziggy, I might have done a little online shopping.... 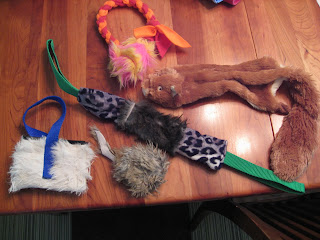 Ok, so I may have gone a little crazy with the furry toys – but I’m trying to get Ziggy to play more, and the time he’s most enthusiastic is when he’s chasing squirrels, so I went shopping for (lots of) furry toys.  Here’s the breakdown:
This was donated by our German Shepherd friend Chance.  It’s too little for her, and Ziggy LOVES it.  It’s a bit small for him, too, so play is closely supervised.  I carry it around in my pocket – or under my arm – when I’m training, and periodically throw it for Z if he’s focusing really well.  Mom drops furry things – how fun is that?!
This has a Velcro top, and contains low-cal dog treats or dry kibble.  I’m trying to teach Ziggy to pick up the bag and bring it to me – then I’ll open the bag and let him snack on the treats inside.  He now understands that he’s supposed to put it in his mouth, but the retrieve & hold part is still a bit lost on him.
Right now these are a bit of a “bust.”  Ziggy’s not so interested.  Well, you win some, you lose some.  And who knows, maybe one day he’ll want to tug…
Any suggestions on other “can’t resist” training toys?
Posted by Lani at 6:26 PM 3 comments:

I figure birthday #10 deserves a special present.  So here it is: 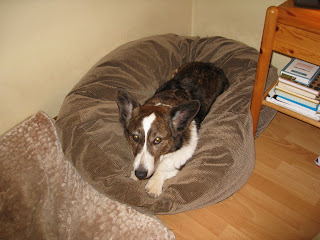 Maggie doesn't look to thrilled with her new bed in this picture, as I had to pose her on the bed using a down stay.  She much prefers to sleep under our (human) bed in the summer - too hot for a dog bed - and was slightly annoyed that I made her stay on this bed.  Maggie's life is very hard.

The bed is called the "slumber ball" - I found it on Drs. Foster Smith website.  I love their beds, and Maggie loves to "nest," so I figured it would be perfect.  She has done some good nesting in this bed already, and the nice thing about it is that it's big enough that it doesn't get shifted all over the bedroom when she nests furiously.  All 3 dogs like the bed - Maggie & Ziggy sleep on it (even at the same time once!), and Denzil likes to lay in the bed next door and use this one as a pillow.
Posted by Lani at 2:55 PM No comments:

Email ThisBlogThis!Share to TwitterShare to FacebookShare to Pinterest
Labels: Maggie

Well, it's all relative, but this week in agility, Ziggy was much more interested in working with enthusiasm.  So the question is…why?
2 – He’s learning his job a little more.  One thing I’ve learned about Ziggy (but keep forgetting) is that he works more quickly when he’s sure of what he’s doing.
3 – I’ve been trying to find things that he finds interesting, fun & surprising.
Posted by Lani at 4:30 PM 2 comments:

Happy 10th Birthday, Maggie!
I can’t believe Maggie is 10.  I got her when she was 7 months old.  She was my first dog as an “adult.”  She has taught me, and continues to teach me, so much about dogs and dog training. 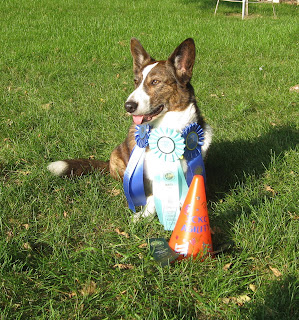 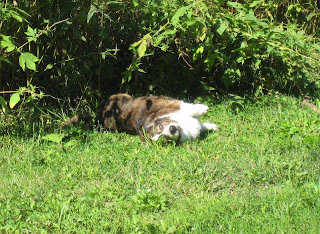 This one's a picture of Maggie showing how well she can do one of her favorite things
(rolling in stink)
My most memorable moments with Maggie this year:

·      In competition:  Getting a “Q” and taking 1st place (the other 10 dogs nq’d) in Open A obedience – on the first time in the Open ring for both of us!  I was so proud of her!
·      In “everyday life”:  Maggie diving into the bushes after a too-quick-to-be-identified critter and me having to dive in after her to pull her off the brush pile where the critter was hiding.  She had blood flowing out of her mouth.  It was her blood.  My heart sank, as we were 1.5 miles from home.  I pictured myself carrying a 35lb bleeding dog all the way back.  I used our cool-down water to flush her mouth.  Thankfully it was a small scrape and the bleeding slowed to a trickle pretty quickly.  Maggie was undeterred and continues to indulge her love of chasing small woodland creatures whenever she can.
It’s been a great year with my lovely brindle girl!
Posted by Lani at 7:00 PM 4 comments:

Email ThisBlogThis!Share to TwitterShare to FacebookShare to Pinterest
Labels: Maggie

... Or so my agility instructor tells me last night.  Followed by:  "We won't turn him into a border collie overnight, but we really need to build his want." 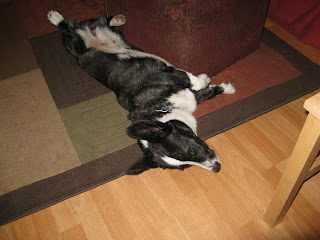 And so I begin in earnest.  How do I discover what will really motivate this boy?  Carrying around a live squirrel would work, but somehow that doesn't seem feasible.

So I turn to the experts.  This weekend:  Sylvia Bishop.  I've audited her clinic.  I've bought the DVD's.  Time to watch them.  I'll let you know how it goes....

Who needs a one of those fancy home security systems?!   We've got our own 3 phase approach: 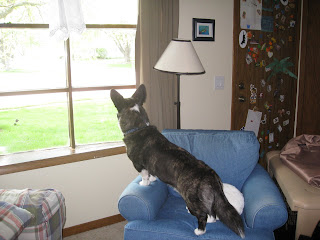 STEP 2:  Sentry alerts backup to possible danger - be on alert! 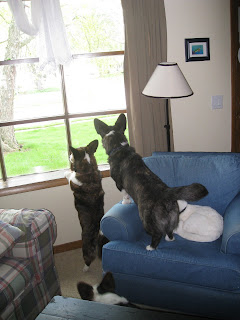 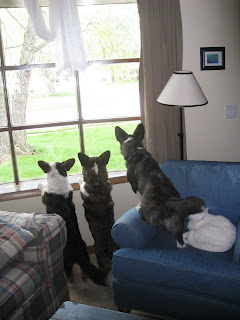 Danger averted - greyhounds on walk with owner in neighborhood have moved on....

Some things to note:

1 - Yes, there's a lot of barking our in the house - you have no idea how much possible danger lurks in our neighborhood...

2 - White cat in chair does not appreciate this security system

Maggie, Denzil, and Ziggy are very much alike, yet at the same time very different.  These differences are certainly apparent when they are working (training and competing).  The most challenging dog at the moment is Ziggy.  I’ll get to him in a moment, but first here’s what I’m comparing him to:

I realize that I’m a bit spoiled with Maggie because she’s a very “honest” dog who’s easy to motivate and train.


Denzil is my second Cardigan.  Denzil has always been an enthusiast, but early in his life, this made him quite a challenge to train.  His “distract-o-matic” was set on high until he was about 2.5 years old, and the fun happening around him was often more interesting than me. Finally his attention kicked in, and now he has a great deal of focus most of the time.  I’ve had people I trained with early in Denzil’s life actually ask me if he’s the same dog!

Denzil and I have figured out how to work well together.  My main challenge now is finding challenging activities that he’s physically able to participate in.

A nice way to start a Monday

I got to work this morning, and who did I see?  Yes, the same fawn that visited a week and half ago. 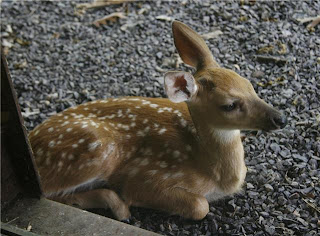 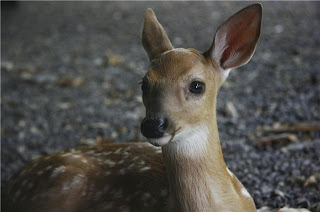 Sometimes Mondays aren't so bad after all.
Posted by Lani at 8:47 PM No comments: 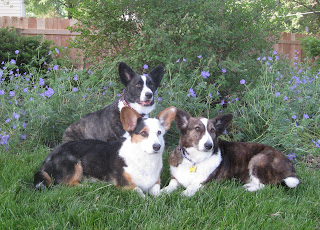 Here's a picture of the 3 dogs taken on Friday.  Don't they look lovely (not that I'm biased in any way) - shiny, clean, and just like new!!

Friday was a busy day for the dogs.  They went to the groomer and to the chiropractor, so inside and out they are feeling good.

This is the first time any of them have been to the groomer --it's a job I can do easily at home, and I'm a bit too cheap to pay someone else to do it.  Also, I enjoy the crazy after-bath running and rolling - although not so much the smell of wet dog around the house.

So why did they go this time?  One word:  guilt.  Not my guilt.  Our petsitter's guilt.

Tuesday it rained.  Tuesday Pete was working out of the house.  Tuesday the neighbors had a couple of terriers visiting.  Tuesday when the petsitter let the dogs out they ran up and down the fence and came in MUDDY.  Pete got home to find 3 muddy dogs stashed in their crates. Wednesday the petsitter came by and apologized profusely for the muddy state of the dogs.  Pete explained that corgis + rain = mud, and that muddy dogs are normal in our home.  She would have none of it, and offered to pay for a trip to the groomer.  Above and beyond on her part, and what a wonderful treat for us!

The 3 also went to the chiropractor.  At lunchtime a couple of colleagues and I were talking about our weekends, and I told them that I got to spend Friday evening driving 45 min each way to the chiro for my dogs.  They stopped eating (really, they did) and looked at me as if I were insane.  Maybe I am, but the chiro really helps Denzil feel better, and Maggie moves more freely after her adjustment.  Ziggy gets to go now, too - for maintenance - as he's now officially a "performance dog."

Anyway, it's Saturday morning and they're all 3 still smelling, looking, and feeling great.  A good start to weekend, indeed! 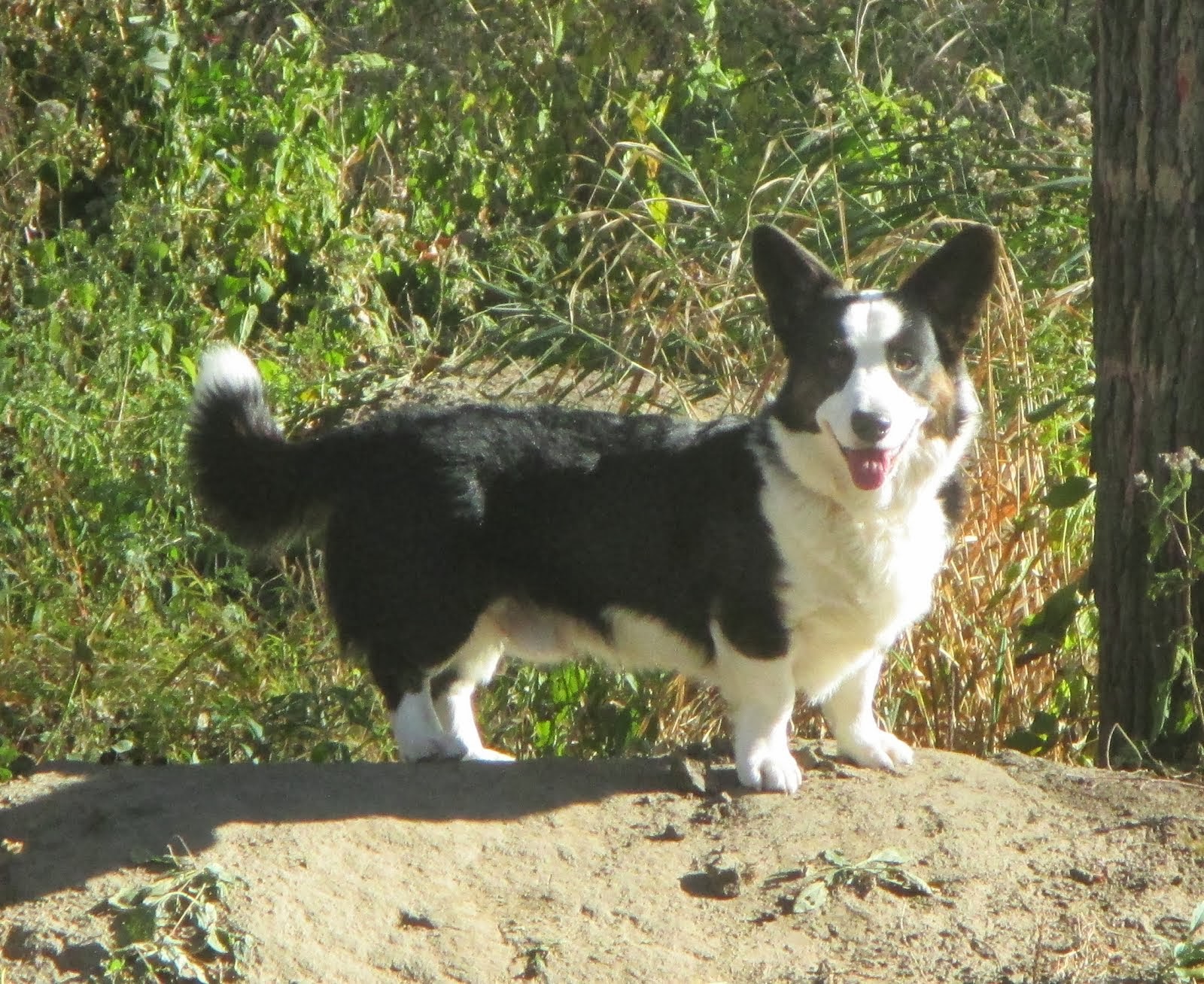 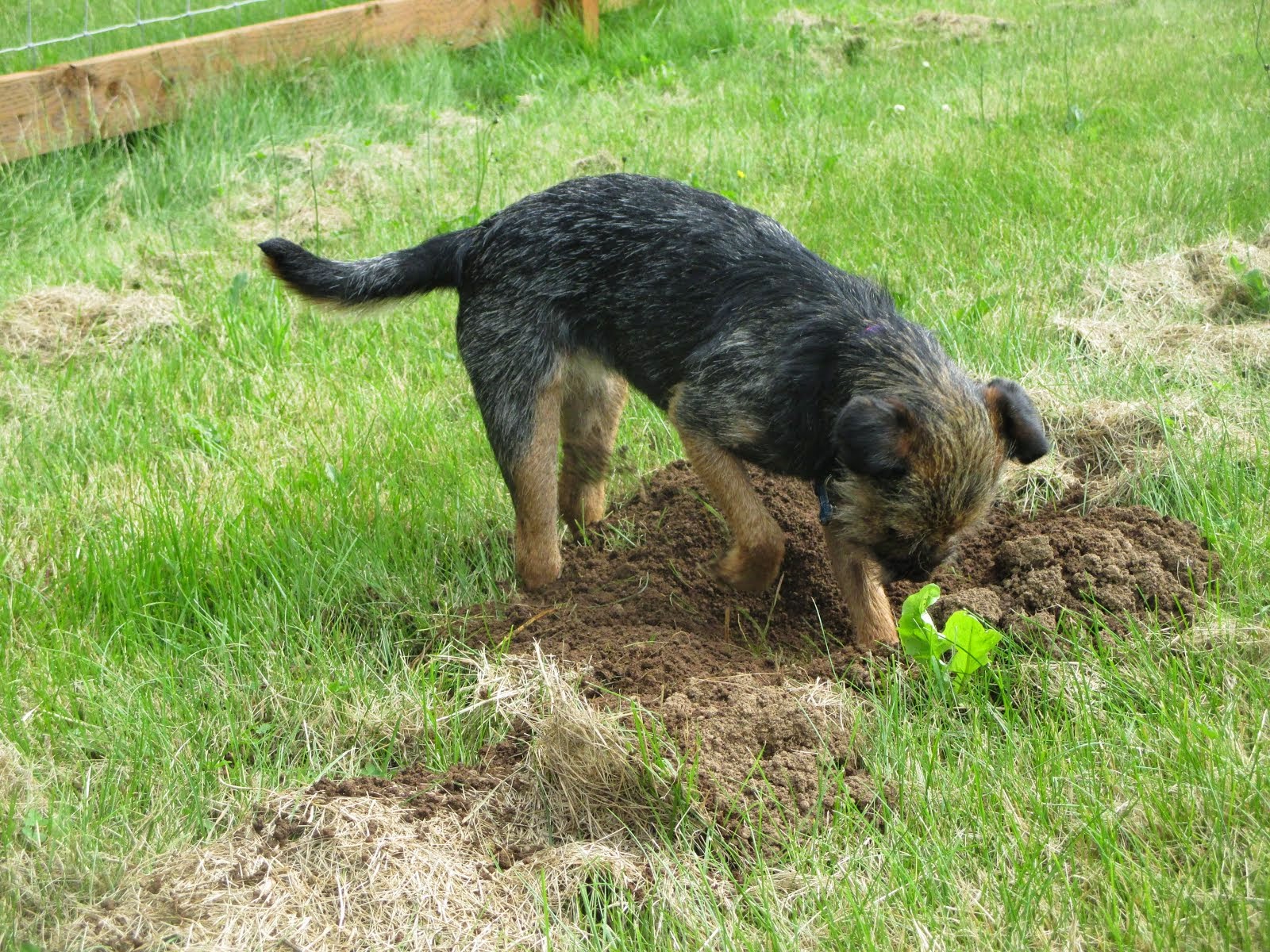